TWO Irish entrepreneurs are among 30 high achievers announced as finalists in one of the UK’s most prestigious awards celebrating women in technology.  Patricia O’Hagan MBE, from Belfast, is up for ‘Entrepreneur of the Year’.

The 2015 FDM Everywoman in Technology Awards take place in London on March 17, when a panel of experts will judge the candidates based on their career success, potential for future achievements and support for women in the industry. Ms O’Hagan MBE, is the CEO of Core Systems where she has led the company through growth into international markets, with over 20 years experience in the IT industry. Patricia was awarded an MBE in the Queen’s New Year Honours List in 2013 for her services to the NI economy; 98 per cent of sales over the last year have been generated by exporting. Patricia regularly speaks at local events to inspire young people to consider a career in the technology sector and is heavily active in the local community. She is a member of the Economic Advisory Group (EAG), was named University of Ulster Entrepreneur of the Year in 2008 and in 2013 was recognised as Outstanding Businesswoman of the Year by Women in Business NI (WIBNI). 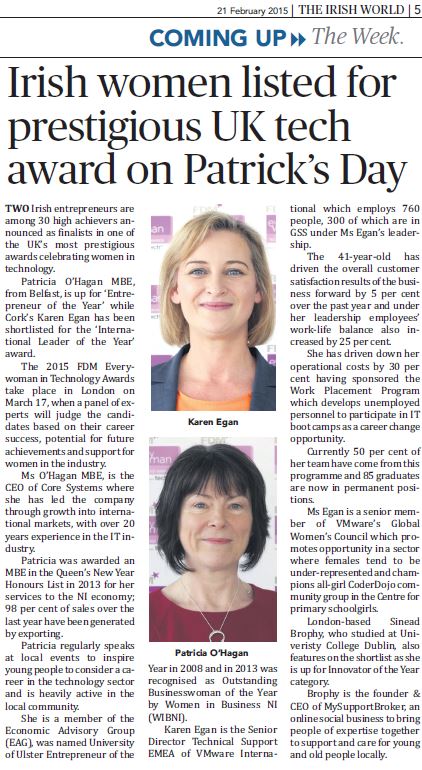 Going Viral: The need for digital technology in prisons is greater than ever - Prisoner Learning Alliance prisonerlearningalliance.org.…

The Nelsons Trust @WestminBriefing shares details of their work addressing trauma for women in risk or within criminal Justice System through their Women’s centres. #WBFemaleOffenders pic.twitter.com/PyVtVX5UYw

Youth Justice Conference addresses issues of Youth violence and how this can be changed through education and collaboration. @YouthJustice19 #yjc19 pic.twitter.com/T5EnOwL0YH

Busy day @digitech2019. Excited to exhibit with some of the most innovative organisations providing their products and services for the public sector in the UK! @gov_procurement @hmpps @MoJGovUK pic.twitter.com/vdIEyM4F1Y